Script - Tenzer Animation
We will help you develop a powerful and engaging script for your explainer video or animated commercial. Our attention to story is what seperates us. If you have no idea how to tell your story we will create a script from scratch, if you have a script we will give you advise and try to make it better and more engaging. Our scripts give the animator narration but also detailed scene direction, character emotion and setting.
animation script, explainer video, animated ad, animated commercial, animated infographic, animation scene direction, how to write a script
15602
page-template-default,page,page-id-15602,page-child,parent-pageid-14093,ajax_fade,page_not_loaded,,qode-title-hidden,side_area_uncovered_from_content,qode-theme-ver-16.1,qode-theme-bridge,wpb-js-composer js-comp-ver-5.4.7,vc_responsive 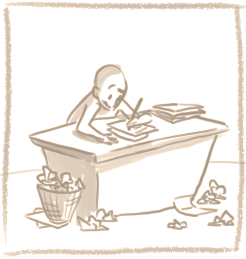 The script concept is so important when it comes to creating a good video. This is why we don’t even look at character art or design until we have the concept down. A good rule of thumb is 80 words for every 30 seconds of video. We need to make every word count. But many people don’t realize that animation can say things much faster then a narrator and as a result we can say  more in a much shorter period of time. our scripts are a combination of narration and scene direction, this way we can make sure all of us are on the same page from the very beginning. 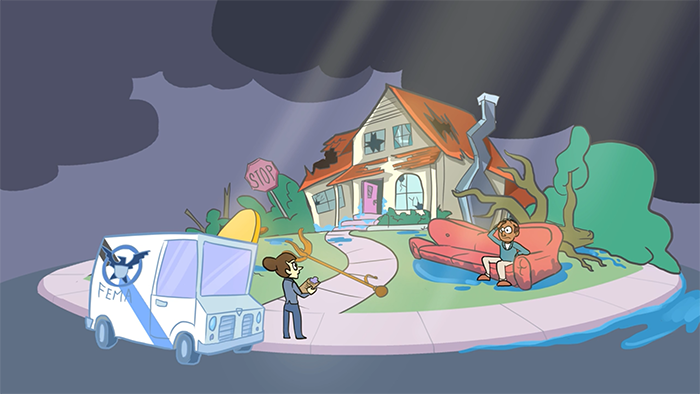 Narration: Sometimes it’s hard to predict when a disaster might occur.

Narration:  After a long day at work, the last thing on your mind is getting flood insurance.

Narration: But like with all natural disasters, it’s not IF a flood will occur but WHEN..

Scene 4 (inside house, water level is rising, Character still fast asleep on couch  which is now floating with other furniture)

Narration: According to FEMA, flooding is the number 1 natural disaster in the US with claims averaging nearly 2 billion annually between 2006 and 2015. (couch floats towards front door)

Scene 5 (outside of house, front door bursts open, couch with character floats into the front yard which is now a lake, water quickly reseeds showing the devastation, trees uprooted, debris everywhere, house disheveled, this wakes up character who is startled)

Narration: In some of the most flood prone areas of our country only 20 percent of residents have current flood insurance policies. (character sits up and looks at his flooded house, mouth open). Even if the president declares a disaster you’re not going to get much help from the government. (van with FEMA written on it quickly pulls up to house, agent steps out of van, looks at property, shakes his head, gets back in the van, van peels out)

(Character pulls out cellphone, camera zooms in on character, go to split screen, agent on the other line seated in cushy office with sign in the background that reads “Best Homeowners Insurance”)

Narration: Flood losses are also not covered by your homeowner’s insurance policy (agent on the right side hangs up phone, full screen of character still on the phone, mouth open)

Scene 6: (outside of Mitchell and Mitchell offices with logo)

Narration: It’s important to get proper coverage now so the insurance is in place before a disaster occurs. (inside agent office, Mitchell & Mitchell logo on the wall, agent and character seated at desk talking, then shaking hands).  It will take 30 days before your new policy kicks in.

Scene 7 (outside home after flood, disheveled house, character on couch staring at house)

Narration: Then you will have peace of mind that your most valued asset is secure (couch reverses back into home, uprooted trees become rooted, disheveled house goes back to original house, dark clouds lift and sun comes out. End with Mitchell & Mitchell logo)